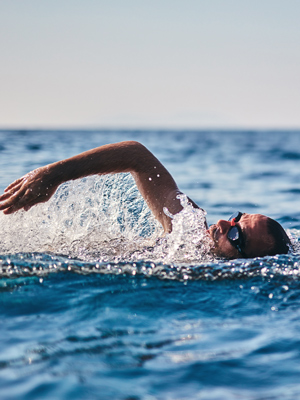 The bottom swimming it includes all swimming events that take place in open waters such as rivers, lakes and seas (for this reason it is also called  open water swimming ).

It is divided into four categories: mid-country swimming (up to 5 km), cross- country swimming (up to 15 km), long-distance swimming ( up to 25 km) and marathon (over 25 km). Its popularity has also grown thanks to the spread of ultra-endurance events such as ultramarathon, ultra-cycling and in particular ultra-triathlon, among which also well-known competitions, such as the Ironman, stand out. The fact of taking place in open waters adds considerable difficulties to the athlete, mainly related to the environment in which the performance takes place.

Different places have changing environmental conditions , including water, temperature, humidity, solar radiation and unpredictable tides or currents. Furthermore, the duration of most events (which normally ranges from 1 to 6 hours) creates unique physiological challenges for thermoregulation, hydration status and also for muscle "fuel" reserves.

Current nutritional recommendations for open water training and competition are an extension of pool swimming recommendations or are extrapolated from the study and observation of other athletic populations with similar performance patterns. In these disciplines, competition nutrition should focus on optimizing pre-competition hydration and managing glycogen stores .

On a purely theoretical level, swimmers should be able to rely on energy sources and fluids consumed before competitions, at least for the shorter events: for longer races, when over 10km distance or more, integration of fluids and energy sources can instead occur when tactically appropriate, in order to support the performance at best for its entire duration.

During longer races, up to 90 g / hour of carbohydrates 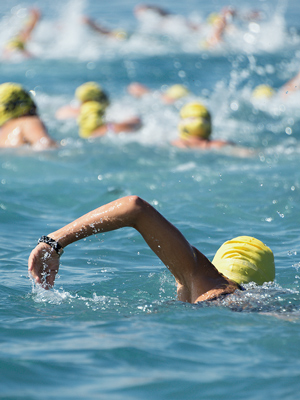 from easily consumable and transportable sources, such as gels and drinks , should be used in order to maintain and restore muscle glycogen stores .

Exposure to variable water conditions and ambient temperatures will also play a significant role in determining nutritional strategies to best face the race. Per example, in extreme environments, thermoregulation can be assisted by manipulating the temperature of the fluids ingested : a simple but functional strategy.

Training for open water swimmers focuses on improving endurance skills , especially by enhancing aerobic capacity ; in fact, in analyzes carried out on training fields used by elite competitors, over 85% of the training was undertaken at intensities focused on the development of these abilities, with less than 2% dedicated instead to anaerobic training or training at " submaximal " speeds (VanHeest et al., 2004).

This similarity of the work done suggests that the nutritional requirements for training open water swimmers are consistent with and similar to the recommendations for distance swimmers in pool events during high-volume training periods.

From an anthropometric point of view, the data collected on open water swimmers have shown that they are on average lower, with a lower body weight and with a lower percentage of lean muscle mass compared to "pool" swimmers (Carter & Ackland, 1994; VanHeest et al., 2004; Zamparo et al., 2005).

This may be due to the fact that less absolute Energy is required to successfully complete open water events than sprint events (50 and 100m), or simply that in this type of sporting event participation is greater for non-professional athletes. .

From a metabolic point of view, the maximum oxygen consumption (VO2max), which has always been identified as a performance index for open water swimmers (80 and 66 ml / min / kg for male and female swimmers, respectively), has been reported to be more high (VanHeest et al., 2004) than those observed in swimmers of shorter distances (Capelli et al., 1998), but similar to that found in other "land" endurance athletes.

Given that the training undertaken by open water swimmers consistently involves large volumes of work with a strong development of aerobic capacity (Van Heest et all 2004), it is very likely that similar training volumes constantly draw on muscle glycogen stores, highlighting the need for nutritional strategies focused on glycogen replacement for prolonged or high intensity sessions, particularly during the high volume phases.

Failure to sufficiently replenish glycogen stores between training sessions can impair the open water swimmer's ability to complete the high intensities and training volumes necessary for lasting success (see review by Shaw et al., 2014) . Carbohydrate intake during a workout can also contribute to the total daily carbohydrate requirement, provide additional fuel to support performance in a particular session (see Shaw et al., 2014), and allow for the practice of feeding tactics that will then be used. in competitions.

Another important factor to consider are the responses of the immune system , which can be compromised when exposed to extreme environmental conditions (such as water temperature) and worsen when they are added to the stress hormone, the release of which is associated with high intensity / high volume training, particularly when sessions are completed with low carbohydrate availability (Pyne et al., 2014).

Due to the extended nature of bottom swimming, extended workouts are often undertaken in warm conditions, during which proper hydration strategy must be considered . Although the reported values ​​for unrelated fluid loss to urine during swimming and daily body fluid turnover in these athletes are not as high as for land-based activities, losses of ~ 0.5 L / hr can be expected ( Cox et al., 2002a; Leiper et al., 2004; Lemon et al., 1989).

Therefore, open water swimmers should consider hydrating fluids even in the form of energy drinks during extended sessions.

The ergogenic aids that swimmers can obtain through the use of specific supplements and that allow the athlete to improve performance have been examined by many authors, including Derave and Tipton (2014). Here are those with the most scientific evidence.

A sport loved by everyone, swimming is complete and very technical: in the water the body is supported and is in a situation of reduced gravity, allowing better weight control. Despite this, its complexity and the difficulty in managing all the variables related to the surrounding environment and the duration of the performance should not be underestimated. Optimizing training and nutrition is therefore crucial to complete even the most difficult challenges, and the correct integration can provide the support that can make a difference.

Suggested articles
Triathlon | How to train? Practical tips to get started
Dehydration in endurance sports: risks to performance and how to manage it
Water retention, training, nutrition and supplementation