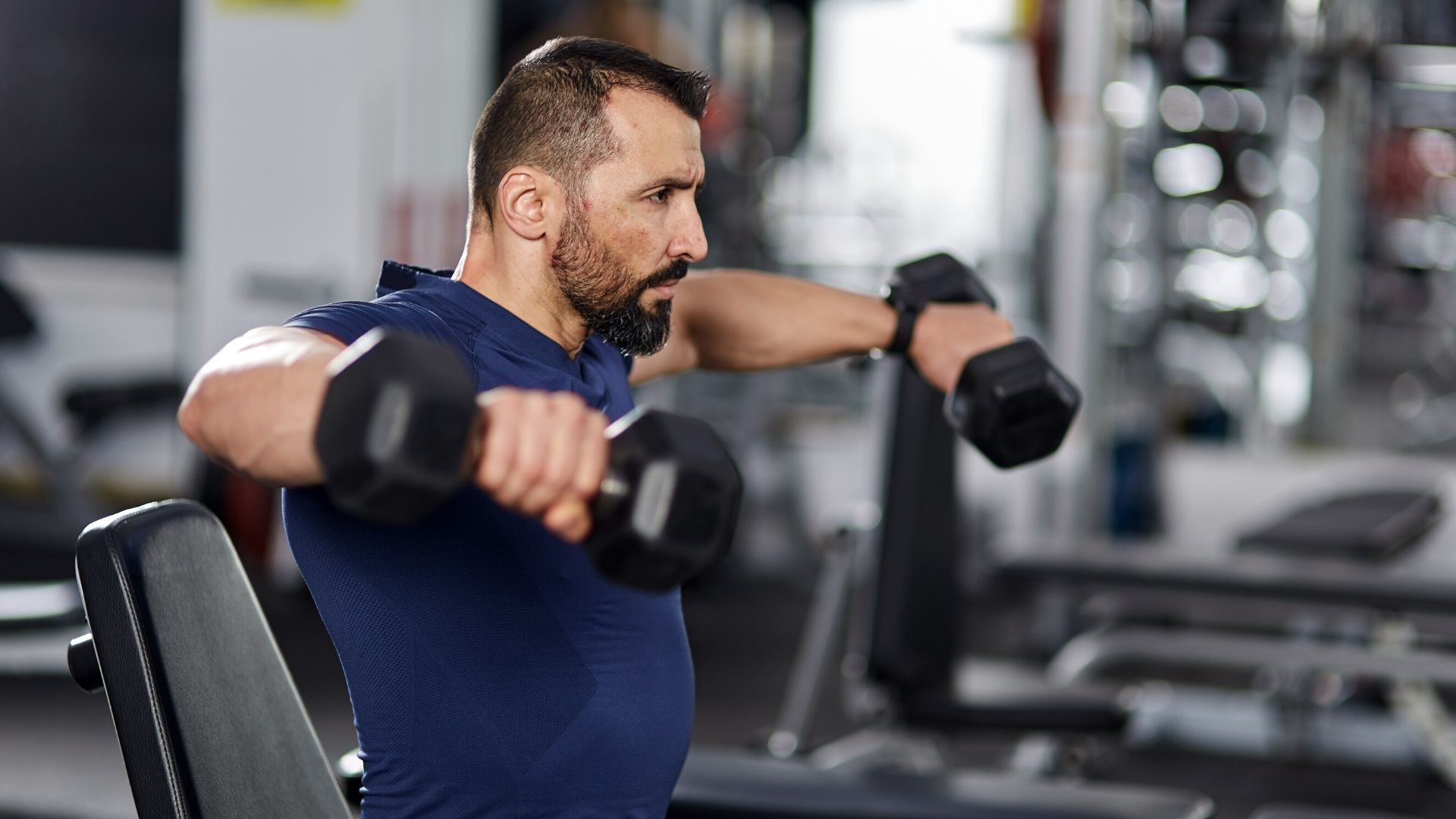 Anatomy of the deltoid muscle

The deltoid is the main muscle in the shoulder, and is anatomically divided into three groups of fibres or "heads": the anterior deltoid, the medial or lateral deltoid, and the posterior deltoid.

All three heads converge in the humerus, but they originate from three different points.

anatomy of the deltoid muscle

Originating from the clavicle, its main function is to raise the arm forward or advance it (bring the arm from outside to inside).

Originating from the acromion on the scapula, its role is to move the arm outside or sideways.

Originating from the spine of the scapula, its function is to move the arm back.

All the shoulder movements described are not carried out by the deltoid exclusively, but rather take place in synergy with other muscles. It is virtually impossible to completely isolate the deltoid with an exercise, because, depending on the movement, different muscles of the upper body come into play to complete the kinetic chain of the movement.

Let's see which exercises are best for training the deltoid.

The first exercise trains the posterior deltoid muscle, which is typically weaker than the other two.

Position yourself tight against the pillow and grab the grips with your palm facing down.

Stretch while opening your arms outward, about 1 second for the contraction phase. Hold the maximum contraction position for a little less than 1 second and slowly return to the starting position, a negative phase of about 4 seconds.

Exhale as you contract your muscles and exhale when you return to the starting position.

Side lifts are probably the most famous and best known exercise for the shoulders, which isn't surprising given how important they are.

Grab the dumbbells with your palm facing your sides.

Contract your deltoids and raise your arms outwards until they are in a parallel position to the ground.

The forearm should be extended. A slight physiological flexion can help to properly engage the whole kinetic muscle chain, but don't make the angle too closed. The idea is to shorten the lever to facilitate the dumbbells being lifted, but the intensity of the exercise is also shifted to the anterior deltoid rather than focusing on the lateral deltoid.

Be careful when choosing a suitable weight for the exercise, which must be done in the correct way in order to achieve a result.

When you open out your arms, lift them outwards rather than keeping them close toward your chest, as this unbalances the load more towards the anterior deltoids.

The slow forward exercise is also known as the front military press.

It looks like a simple exercise, but in order to be carried out correctly the trajectory of the barbell movement needs to be controlled.

Unless you're a professional athlete and can properly control the contraction of the muscle groups in a way that directs the stress of the exercise to target the muscles that you want to train, it is important to follow the correct trajectory.

The barbell should be held at shoulder width, with your palms facing forward, and positioned at the base of the neck, under the throat.

Exhale, stretch your arms upward and push the barbell above your head.

While stretching, avoid following the perfect vertical trajectory. The perfectly vertical trajectory, which involves tilting the head back so that the barbell is not obstructed, facilitates the movement, allowing greater weights, but shifts part of the overload of the exercise from the deltoids to other muscles, such as the pectorals and triceps.

As such, to carry out the exercise correctly:

This exercise is performed on alternating arms to ensure the stability of the body, and thus focuses more on the muscle contraction of each shoulder, especially the anterior deltoid.

It is not a muscle isolation exercise, however. In fact, the movement also involves the pectoral, the trapezium, the biceps brachii and the coracobrachialis.

Holding the dumbbells with your palms facing toward the body, raise your right arm in front of you, spending 1 second on the contracting phase. Avoid jerking, which facilitates the lift but makes the exercise pointless.

Return your arm to the starting position, preventing back problems by not letting it drop down, but keep your position under control at all times.

Exhale in the descent phase, and then start again with the repetition for the left arm.

Step 4, step 5, and step 6 of the repetition. Then it's back to the starting position

The perfect exercise to complete the shoulder training is the six ways, an exercise where each repetition combines six different movements that must be performed in a precise and controlled manner.

Sitting down, grab two dumbbells with your arms at your sides and palms facing inward.

Keep your chest out and abs contracted in order to stabilise the torso and the whole body.

Here are the six movements of the six ways:

From here, start of a new repetition.

This is an exercise that should be carried out slowly with a side lift, as it is difficult to complete an entire series with a high load.

Now let's see how to combine these 5 exercises in a complete workout for the shoulders.

Training table for the deltoids

Here is a complete workout for the muscle mass of the shoulders, proposed by Gabriele Andriulli, Professional IFBB Wheelchair athlete on the Yamamoto Nutrition team.

Two sets of the first exercise using a light weight with an isometric contraction at the peak of the exercise.

The recovery between sets lasts between 40 seconds and a minute. The weights must be appropriate to the execution technique, which must be controlled in any case.

Suggested articles
Huge Biceps: How To Maximise Muscle Development
Injuries in Crossfit: the most frequent and integrative approach
Obliques | The best exercises for women