The secret of training for a bodybuilder? Intensity
Home / Bodybuilding

The secret of training for a bodybuilder? Intensity

The secret of training for a body builder can be summed up in one word: Intensity.
In my 28 years of training, I have gained experience in every technique and method that's been suggested from one year to the next. I have developed, passing from less intense workouts to more intensive training, and this occurred naturally as I became more aware of what I needed to achieve concrete results, after many trials and errors which, in our world, as well as causing results to grind to a halt, even risk causing us really severe damage.

We all know that muscle growth is achieved through by synergy between several factors:

However, in this article, we're going to focus on training, and I'll start by explaining what I mean when I speak of intensity.

Intensity is the ability to take muscles to the maximum recruitment of fibres, leading to the development of the maximum possible muscular stress, with the purpose of achieving a total depletion of energy substrates in the muscle area being exercised.

All this with the maximum support of blood flow to the muscles, specifically aimed at the "target" muscle, which is what's needed for hypertrophy, that is, for a body builder to construct their muscles. The most common mistake I see is the use of weights that are too heavy, which doesn't give intensity to the muscle tissue blocks being worked on, but disperses the strain of muscular tension onto secondary muscles, or worse still, overloads the joints and runs the risk of causing severe injuries to athletes.

When you're getting people to lift weights, you must have noticed that the muscles have a strong ability to adapt, that is, if you get a strong muscle pain response a few days after the first time you try a new workout, you've definitely worked your muscles well, but from time to time you'll appreciate that the same movement will no longer feel the same, because adaptation to the load often means less pumping, less pain or no pain at all. The body "becomes accustomed" to it, and becomes resistant to changes, which slows any result down even more.

Certainly you can avoid this by introducing variations into your workout, like changing the movements (exercises), or the order you conduct them in; the problem lies in the fact that everyone, with the passage of time, tends to focus on the exercises we find best suited to us, sometimes just for the sake of our "ego", or just through habit, or because we have seen a certain champion perform them .... when a simple change in the angle of execution could really shake up the results.

With regard to this, it seems to me that over recent years machine making companies (made in Europe) have slowed things down; they've pushed me into using apparatus that, in my opinion, is less effective and gives more rounded movements which are less focused on specific targeted work, but unless you live in America and can attend a GOLD'S GYM, you certainly don't have a lot of alternatives available.

The solution is to get out of the stalls and give renewed vigour to both your muscles and your mind, and use intensification techniques in your workout. Over recent years, in collaboration with Gabriele Trapani, who is known as "The Doc" - a guru who knows how to apply every kind of high intensity technique and much more - I have continued the ongoing muscle revolution, and it has allowed me to improve even further.

Which intensification techniques are used most frequently?

In the face of constant cycling of the volume of work, which often tended towards medium or high volumes, there was, in particular, for "key" muscles, an actual "neuromuscular" re-education, in which the weights were put to one side, and "jerks" were performed, to emphasise PEAK CONTRACTIONS, to amplify the engagement of motor units, and CONTINUOUS TENSION, especially by slowing down the negative (eccentric) portion of the movements, which is crucial to giving a significant shock at the level of muscular damage and nerve stimulation, which translates into synergistically significant stimuli for hypertrophy.

Pre-fatigue of the target muscle

Frequently, PRE-FATIGUE was used on the target muscle, which was first stimulated with an isolation exercise followed by a complex one.

Certainly, for the "weight" lovers, an initial lowering of phosphates in the fibres of the pectoral muscles will lead to a subsequent drop in strength, for example, by initiating lateral elevations by the medial deltoids, and after reaching the failure point in this exercise, continuing to to exhaust their shoulders by resorting to distension exercise, using fresh secondary muscles like the triceps, leading to more exhaustion and depletion of ATP, the shoulders, which being a very complex and delicate muscular district, are well suited to this system.
Other benefit, are the fact that excessive loads that could generate injuries are not used. The depletion of phosphates caused by isolation exercises will result in an obvious reduction of loads on equipment in the second exercise, which we would normally have used if we had not pre-fatigued ourselves. So you can limit the risks associated with being overweight that some exercises place on the osteo articular system (an issue that you will understand is very important for professionals!) because you can often do leg extensions before you do squats. 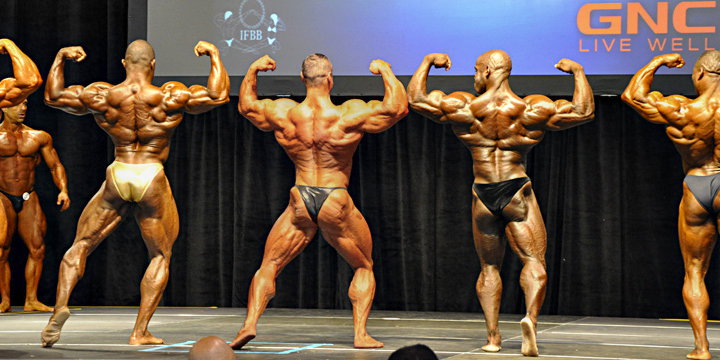 Another technique often used pre contest, is that of STRIPPING, one of the most well-known intensification or "set extension" techniques which can be applied to almost any muscle group. It is generally advisable to use a medium to high load for the first set (example 6-8 reps), so that a large number of motor units are in operation until exhaustion, which allows us to complete a full rep and then discharge the weight.

Often, the series is advanced further, which results in a subsequent reduction in the load, in an effort to exhaust a greater number of motor units.

This technique can be used best with machines on their own, otherwise it's advisable to rely on a trusted training partner who can take the weights off and support you safely.

When you don't need to/ can't arrive at this point using FORCED/ASSISTED REPETITIONS, a simple but very effective technique is PARTIAL repetitions, that is, repetitions which are reduced to a few centimetres of movement, often in the final portion of stretching or pre-extensions, after reaching collapse using complete repetitions.

This technique is also called "THE BURNS" , because it delivers as pleasant though brutal sensation of muscular burning for the final wave (positive in this case) of lactic acid.

These are merely generic examples of the intensification techniques I prefer to use in my workouts which, with the right and appropriate measures, I recommend, not just to make training sessions livelier, but also to deliver continuous results.

Suggested articles
Is there a "best training for hypertrophy"? Volume vs Intensity
Crossfit training to get started. Rules and principles.
Dietary supplement for MMA and combat sports